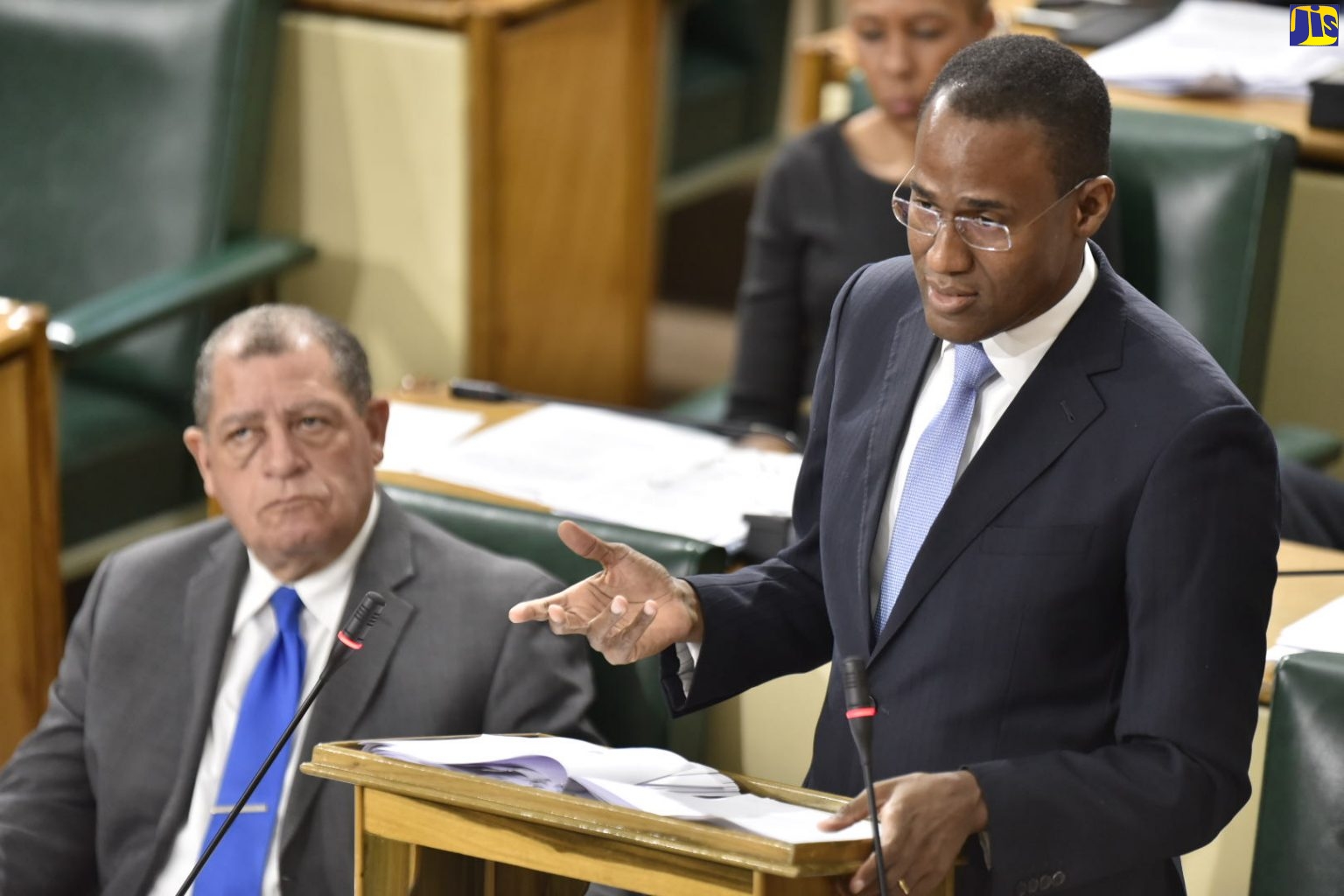 Last week, I wrote about the importance of entrenching macroeconomic stability by complementing its achievement with the building of institutions that can preserve and maintain this stability. I elaborated on the historic enactment of the Bank of Jamaica Amendment Act, which creates an independent central bank with an explicit mandate for price stability, within an accountable, transparent, and robust governance framework.

Even in the midst of the pandemic, we are looking ahead, building economic institutions with the conviction that, in the long run, credible, durable, accountable, transparent and robust institutions make the difference in the economic development process.

My focus this week is on the legislation recently tabled for the creation of the Independent Fiscal Commission. The policy and legislation benefited from local stakeholder consultations in addition to technical advice and support from Jamaica’s multilateral and bilateral partners.

Under the IMF-supported Extended Fund Facility (EFF) of 2013, and the Precautionary Stand-By Agreement of 2016, Jamaica achieved seven consecutive years of primary surpluses (revenue minus expenditure before interest) that exceeded seven per cent of GDP, which resulted in a decline of the national debt by more than 50 per cent of GDP. There is scarcely an international precedent for the means, scope and time frame of this national, bipartisan achievement of fiscal discipline.

There are many factors, often overlooked, that account for this success, the analysis of which is beyond the intent of this article. But, undoubtedly, one crucial factor was the role played by the Economic Programme Oversight Committee (EPOC) across successive administrations.

From the standpoint of the legal apparatus for fiscal responsibility, Jamaica first legislated our Fiscal Responsibility Framework (FRF) in 2010, when, among other things, the requirement to table a Fiscal Policy Paper (FPP) with the budget was introduced as well as fiscal rules expressed as quantitative targets.

The FRF was strengthened in 2014, inclusive of the introduction of an algorithm that prescribes the fiscal balance (revenues minus expenditure) that the Government ought to achieve in order to maintain a fiscal path that is consistent with achieving a debt target of 60 per cent of GDP by 2026. (Due to the pandemic and the associated economic fallout, this law had to be amended to push back the date to 2028).

By law, therefore, this debt anchor in our FRF ought to guide fiscal policy.

However, laws alone do not assure us of fiscal responsibility into the future. We need institutions, too. The goal, therefore, is to have a domestic institution fit for Jamaica’s purpose that combines the independent fiscal review and analysis that the IMF provided, along with the domestic monitoring, ownership and reporting embodied by EPOC, all of which contributed to Jamaica’s internationally recognised fiscal transformation. This domestic institution we seek to establish is an Independent Fiscal Commission, joining more than 40 other countries in the world that have established similar independent fiscal institutions.

Consistent with international best practices, the Independent Fiscal Commission’s mandate will be to provide the public with an informed and independent opinion on the soundness and sustainability of Jamaica’s fiscal policies and positions, in keeping with Jamaica’s Fiscal Responsibility Framework. Key operational aspects proposed in the legislation include:

• The Commissioner: The Fiscal Commission will be headed by a fiscal commissioner, appointed for a maximum non-renewable term of seven years by the governor general, after consultation with the prime minister and the leader of the Opposition. The commissioner – who will be identified by an open recruitment process – is expected to be a person of high integrity who possesses the knowledge, expertise and experience in the area of public finance, macroeconomic forecasting and fiscal policy management and assessment required to discharge the functions of the office efficiently and effectively. Dismissal of the commissioner is possible only for cause. It is expected that the Fiscal Commission will be staffed with professionals who support the commissioner in fulfilling the commission’s mandate.

• Quarterly Reports: The Fiscal Commission will issue two Economic and Fiscal Assessment Reports published within 10 days of the release of the FPP and the Interim FPP in February and September/October each year. These reports will include the Fiscal Commission’s opinions on the soundness of Jamaica’s fiscal position in the context of the FRF, while also assessing long-term debt sustainability. The latter would, for example, stress test the interest and exchange rate assumptions, debt composition, as well as economic and fiscal risks, similar to the IMF’s debt sustainability analysis. The Fiscal Commission will, however, not assess the policies underlying the FPP, which are social policy choices of the government in place.

The Fiscal Commission will also produce two statements on fiscal performance, in respect of the June and December quarters, which provide an assessment of the Government’s achievement of the budget and fiscal targets pursuant to the FRF. These reports are analogous to EPOC’s updates on fiscal outcomes versus targets.

All of these reports will be subject to a corrections policy, to prevent disclosure of market-sensitive information and factual errors.

• Advisory Committee: An advisory committee, comprising a group of five stakeholders with experienced and qualified representatives from academia, the private sector, trade unions, and civil society will support the Fiscal Commissioner by providing periodically their views on the fiscal and economic outlook – while not encroaching on the operational independence of the Fiscal Commission. For full transparency, the meeting schedule with the advisory committee will be disclosed a year in advance, and minutes of meetings will be published within six weeks or prior to the next meeting, whichever is earlier.

While the Fiscal Commission will act as a check against unrealistic budgeting, fanciful assumptions and creative accounting, inclusive of arrears and deferred financing, its role only provides an informed “second opinion” with its statements, forecasts and analyses. It will have no power to legislate, nor to make, change or implement policy. The Fiscal Commission monitors, analyses, informs and reports. With an engaged citizenry, as is increasingly the case in Jamaica, that can go a long way to incentivise adherence to responsible fiscal policy, as our experience under the EFF and PSBA demonstrates.

WHY IS THIS IMPORTANT?

Economic independence requires that we build domestic institutions and invest in the technical capacity of Jamaicans that allow us to responsibly chart our own course, through good times and bad, and responsibly pursue our national objectives.

High levels of debt that crowd out productivity-enhancing capital expenditures and squeeze spending on education, health and social support threaten our economic independence. Furthermore, high debt levels remove policy flexibility when this is most needed – at the bottom of the economic and/or business cycle.

With lower and lower debt, we can more easily achieve longer and longer unbroken periods of economic growth, sustainably lifting more people out of poverty, while retaining the policy flexibility to implement counter-cyclical measures to influence shorter and shorter recessions at the cycles’ bottom.

The graduation of Jamaica from an IMF programme in 2019 and the experience with EPOC opened an opportunity to create our own Independent Fiscal Commission as the permanent guardian and arbiter of Jamaica’s Fiscal Responsibility Framework.

In passing the legislation to establish the Independent Fiscal Commission, we aim to normalise fiscal responsibility into the future by institutionalising the critical analysis, review and reporting that proved instrumental in Jamaica’s fiscal transformation.

By building institutions that assure households, businesses and investors of price stability and fiscal responsibility long into the future, Jamaica will undoubtedly recover stronger.